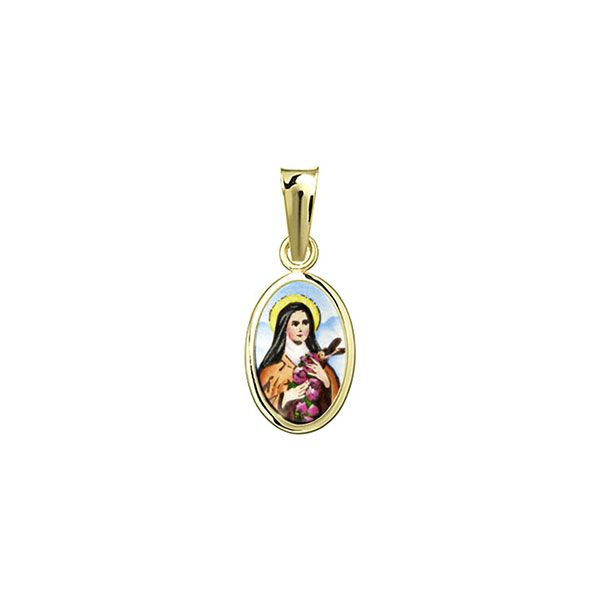 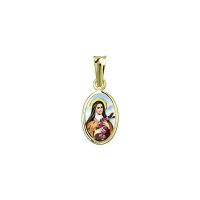 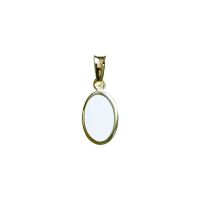 A miniature medal of Saint Therese of Lisieux, with her religious name Therese of the Child Jesus and the Holy Face, sometimes referred to as "Theresa of Jesus", was a French nun. Now she is worshiped as a Catholic saint, virgin and mystic and a great figure of the Carmelite Order. She is also known as the Little Flower of Jesus or just the Little Flower. Pope John Paul II. declared her a teacher of the church in 1997 (Doctor Amoris). She is the patroness of tuberculosis and AIDS patients, florists and rose growers, orphans, and during the World War II also pilots and all aviation personnel, missions, missionaries, Carmelites and the whole of France and Australia.
Saint Therese was born on January 2, 1873 in Alencon as Thérése Martin. She grew up in a Catholic family and attended the Benedictine school in Lisieux. When she was 9 years old, her sister Paolin, whom Therese considered her second mother, entered the Carmelite convent in Lisieux. Paolin was later followed by the oldest of the Martin sisters Maria. From childhood, Therese felt a vocation to consecrated life and, like her sisters, longed to become a Carmelite. At the age of 15, Therese was exceptionally accepted into the Order of Carmelites. In 1927, Pope Pius XI. declared Therese of Lisieux to be "the main patron of missions around the world" even though she did not move away from her monastic seclusion from her age of 15. On May 3, 1944 (just before the liberation of France), Pope Pius XII. described Therese as "the second patroness of France along with Joan of Arc".
We commemorate the feast of st. Therese on October 1.

As are other medals of ours, Saint Therese of Lisieux is also handpainted with utmost precision. After painting, it is fired at 700 ° C, making the surface perfectly glossy and hard. The other side is brilliantly white, without lettering. The Saint Therese of Lisieux miniature medal itself is decorated by its handcrafted 585/1000 gold frame with a hallmark.
You will receive this pendant in a giftbox with a certificate of originality in eight languages, already included in the shown price. 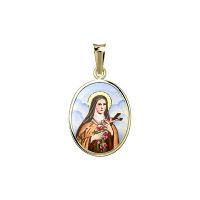 This saint medal is individually painted and fired in a kiln to the temperature of 700°C ...
14k Yellow Gold Chain Fine 1mm 45cm 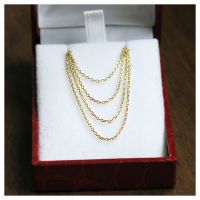