This St. Anthony medal is individually painted and fired in a kiln to the temperature of 700°C (1300°F). A solid 585/1000 hallmarked gold frame is hand-engraved. 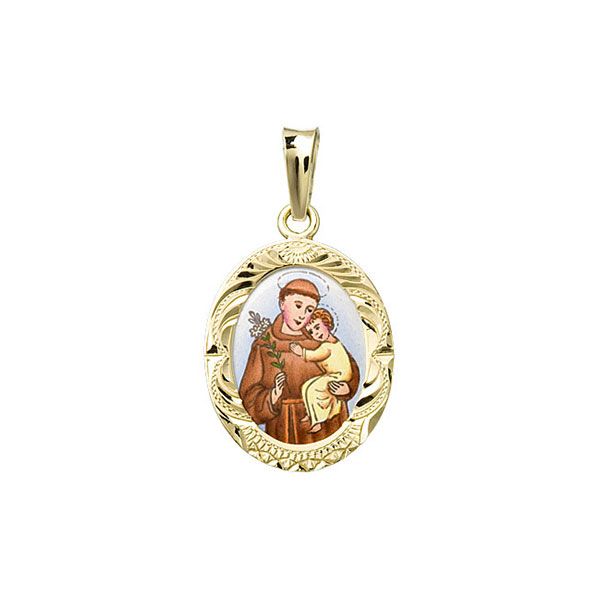 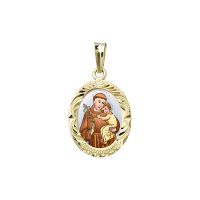 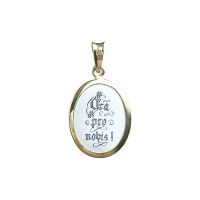 Medallion of the Franciscan monk, theologian and preacher also called st. Anthony of Padua or Anthony of Lisbon, is undoubtedly one of the most famous saints and Franciscans. He is depicted as a man in a monk's robe, with the child Jesus in his arms and a book or lily.
Saint Anthony was born in Lisbon, Portugal in 1195 and his parents named him Ferdinand. His mother Teresa Pais Taveira and father Vicente Martins were of noble birth.
In his youth, Anthony joined the Augustinian Order in Lisbon. He decided to faithfully carry out the gospel principles. He converted to the Franciscans and became a priest. He longed for missionary work in Africa but God decided otherwise because he landed in Sicily. After revealing his excellent knowledge and talents, which he hid in humility, he concentrated on preaching. Francis was commissioned to teach theology in Bologna and elsewhere. Anthony passed not only through northern Italy but also through southern France, teaching that humility, poverty, patience and obedience are the languages of the Holy Spirit by which we testify of Christ. He always emphasized the need for the sacrament of reconciliation. He died prematurely in Arcelle near Padua.
Saint Anthony is the patron saint of Franciscans, travelers, miners and bakers, fiancés, spouses and families.
The saint, who is at the same time the patron saint of lovers, passengers but also lost things, is called for a happy birth and against infertility.
His attributes are: baby Jesus, book, bread and lily.
The feast of this "saint of the whole world" as the Pope Leo XIII. called him, we commemorate on June 13. 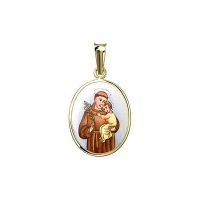 This medal of Saint Anthony is individually painted and fired in a kiln to the temperature of ...
St Anthony of Padua Pendant 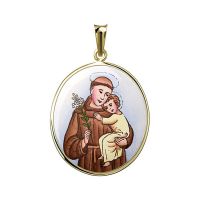 This pendant of St Anthony of Padua is individually painted and fired in a kiln to the temperature ...
Saint Anthony of Lisbon Medal Currency
Kč € $
My Cart
Your cart is currently empty.
My account
Comparison of goods
Add to compare
Select goods to compare
Facebook